In India National Science Day is celebrated on the occasion of Dr. CV Raman’s birth anniversary.  Dr. Raman got Nobel Prize in Physics for his discovery of Scattering of Light called ‘The Raman Effect’.

On 28th of February Giant Meterwave Radio Telescope (GMRT), Khodad organizes a 2 day Exhibition(read Festival) where people from all the age groups come to understand and experience the science. The students, volunteers and professors from various from various institutes and organizations participate in this festival. Nearly 20-25,000 people visit every year.

This year also, like last two years, Mozilla participated in the exhibition. With a clear agenda in mind we spoke about Privacy and Security and Localized Firefox for Desktop , Android and iOS. We also made people aware about Web-literacy and its advantages. Every person who came to the Mozilla booth learned something new.

This time to spread awareness about Localized version of Firefox for Desktop, Android and iOS, we distributed pamphlates which mentioned Download links. We also had surprise for the visitors of the booth,’Mozilla Box’, it had various goodies inside. We asked to pick one to every visitor who answered our questions.

Last but not the least, The GMRT authorities liked what we were presenting and asked us to come next year too.:) They also gave us certificate of participation and a memento.
This event was attended by Chandrakant Dhutadmal, Umesh Agarwal, Ankit Gadgil, Mayur Patil and me (Aniket Deshpande).

Please see all the photos of this event from the following Flickr link. 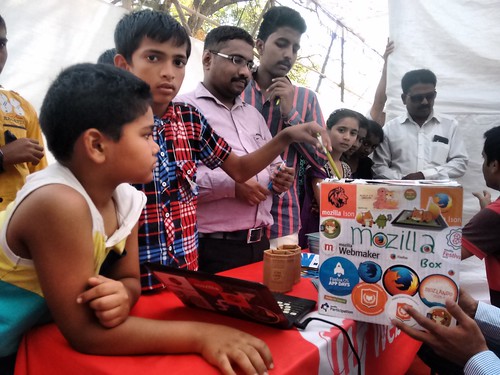